skip to main | skip to sidebar

So I went to Hong Kong and China.

I've been too lazy to write, and unfortunately I can't get logged in to write at school which sucks because I'm there all week from 9-5:00 without any classes all week. But that's another story.

So the place I stayed in Hong Kong is called Chungking Mansion. This is what Wikipedia has to say about the place. I can't describe it any better so here's some cutting and pasting. 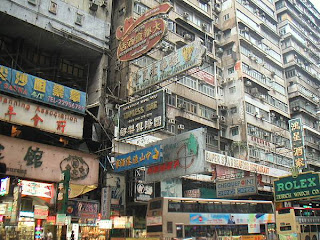 Chungking Mansions is a building located at 36-44 Nathan Road in Tsim Sha Tsui, Hong Kong. The building is well known as nearly the cheapest accommodation in Hong Kong with a single bed of US $8 one night. Though the building is supposedly residential, it is made up of many independent low-budget hotels, shops, and other services. The strange atmosphere of this building is sometimes called by some "the scent of Kowloon's Walled City".

The building was completed in 1961, at which time Chinese residents predominated. Now, after more than four decades of use, there are an estimated 4,000 people living in the Mansions.

The age of the building, the diverse ownership, and management structure are the cause of the building's reputation for being a fire trap. The unsanitary conditions, security, ancient electrical wiring, block staircases contribute to the hazards.

On February 21, 1988, a fire broke out in the building. A Danish tourist who was trapped inside was killed. The fire in this building, as well as a blaze in a similar building provoked a review of rules and regulations concerning public safety.[5]

CUHK anthropologist Prof. Gordon Mathews revealed that there are people from at least 120 different nationalities who have passed through Chungking Mansions in the past year.

With this lively mix of guest workers, mainlanders, local Chinese, tourists and backpackers, the Chungking neighbourhood is one of the most culturally diverse locations in Hong Kong. Chungking Mansions was elected as the "Best Example of Globalization in Action" by TIME Magazine in its annual feature The Best of Asia,[6] although racial tensions are known to boil over occasionally.[7] 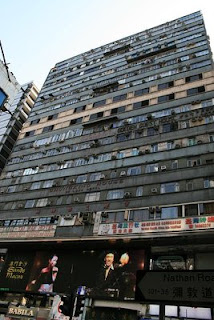 It is also known to be a centre of drugs, and a refuge for petty criminals, scammers,[8] and illegal immigrants. For example, in a Police swoop in June 1995, about 1,750 people were questioned, 45 men and seven women from various Asian and African countries were arrested on suspicion of offences including failing to produce proof of identity, overstaying, using forged travel documents, possessing equipment for forging documents, and possessing dangerous drugs.[9] In "Operation Sahara" in 1996, 52 men and seven women from 14 countries were arrested for violating immigration regulations.[10]

A murder took place there.[11] It was later revealed that Sushila Pandey, a 37-year-old Indian tourist was killed in a domestic dispute with her Sri Lankan partner Attanayake Wasala Dangamuwa, 54.[12]

The Chungking Mansions served as one of the filming locations for Wong Kar-wai's movie, Chungking Express (one of Quentin Tarintino's favorite movies).

So staying at this place was probably the most interesting thing about the trip. When you are outside the front entrance, it's like you are being attacked by a swarm of killer bees, but the bees are Indians and Nigerians and random other dark races trying to sell you shit ("copy watch, suit?"), rent you a room, or get you to go to a restaurant (these pics aren't mine... I didn't wanna be taking out my camera there, but I'm sure it would have been ok). We called it the gauntlet. 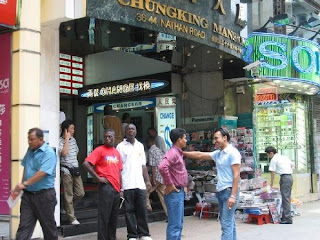 This picture doesn't do it justice though. Multiply it by at least seven to get the typical day when we'd walk by.

It's kind of crazy chaotic outside the front entrance but I didn't feel unsafe. They have security at the door, outside the elevators, and at a security desk in the middle of the long, narrow lobby.

One day the Chinese (or Hong Kongian, um, what is a Hong Kong person?) security man at the elevator just started yelling at this BIG black dude out side the elevator. The black dude was like "Are ya yellin' at me maan? I deedn't do nuttin'!" And the short fat Hong Kongite didn't back down and kept yelling. I didn't know what was going on and I'm pretty sure the black dude didn't so shit.

It actually reminded me of "The Wire" because this dude's friend looked just like Marlo Stanfield and he was chewing on a tooth pick. I was waiting for Chris and Snoop to come around the corner with a nail gun and a roll of plastic...

Speaking of violence, me and Cousin It, I mean, Daniel, were in front of the mansion with our two Hong Kong friends, Debbie and Claire. 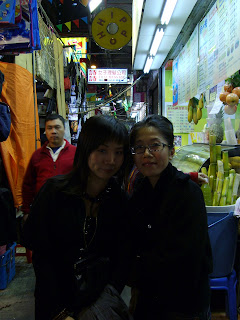 We were all on our way home after a dinner and a few drinks. Fifteen feet away from the entrance this Nigerian dude says some shit like "Oh, so that's how it's gonna be" and he hauls off and smacks/punches the chick in the head. There were a few people around but no one did anything. Not our business, and you don't wanna make shit your business late at night around there.

It was pretty intense. Debbie and Claire weren't overly phased by it, and just crossed the street to walk back home. We offered to walk them home but they are locals and probably know what not to do better than us!

Anyway, go to Facebook and see my pics there if you're interested, although I don't have many pictures of Chungking, but a few.

My first room sucked at the "Taiwan Hotel," the second room was good (in Chungking terms) at "The Welcome Guesthouse", and half the price, if that makes any sense. 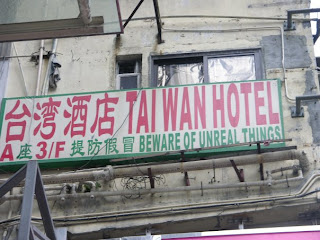 For a really vivid description of the place read this story called Hope and Squalor at Chungkindg Mansion.

The story is a little sensational but it sums up the feeling of the place, and gives a bit of history.

Those phrases were banging around my head for days after I left...
Posted by Richard at 5:08 AM

Hey man, I stayed in ChungKing in February, and it seemed okay. My Hong Kong friend told me I was nuts to stay there, but it's fine.

The touts are friendly and helpful if you give them the time of day and treat them as people instead of as a nuisance, and chaos is a part of Hong Kong. The beds are cramped and the lack of windows drive you crazy after a few days, but it's fine for a short trip. It IS a bit intimidating late at night when it's half-lit and deserted, but that's cool too.

Chung King was probably the most interesting bit of Hong Kong for me. Google Gordon Mathews; he's an anthropologist who spent a few years researching the place.

I'm a bit regretful that I didn't try the curries in the lobby - apparently the best Indian food in Hong Kong.

Yeah agree with everything you said. I'm really glad I stayed there for the short time I was in HK. I've been to many other big Asian cities but there is nothing quite like the Chungking Mansion.

I didn't try the curries there either for whatever reason. I'm not even sure why now that I think of it because I love curry. Maybe the guy I wasn't travelling with didn't wanna eat it. I can't remember.

Definitely gonna look up Gordon Matthews and see what he got to say.

Just wondering how you came across my page?

Your blog keeps getting better and better! Your older articles are not as good as newer ones you have a lot more creativity and originality now keep it up!

thanks! Who are you? Just a random person??

Well, it depends on who wants to know...